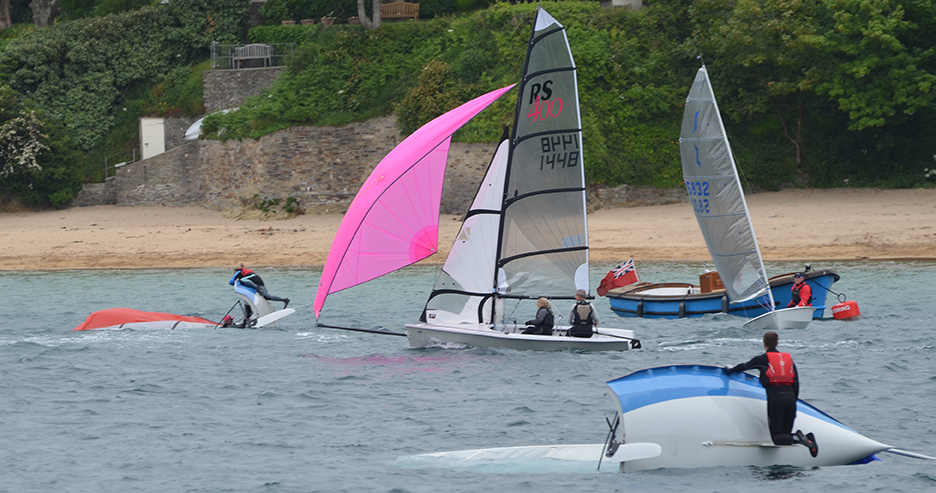 Three SYC 400s, (Figgy and Barney in 411, Matt and Trisha in 1159, James and Jonathan in 1287) put in a good representation from SYC for the three-day event over the May Bank Holiday. The forecast looked good, with that rare combo of wind and sun, and with fifteen boats entered the battle commenced!

Saturday saw just one race in a gusty 12-20 knots, supposedly from the WSW, although with runs becoming beats, and beats runs, it was pretty dependent on where you were on the course! After a clean start, Figgy and Matt were both on the pace while we were more rear 1/3! It was a long race, taking some two hours, with trips to Blackstone near the bar and up to Gerstone (half-way to Kingsbridge), so plenty of opportunities for mishaps, of which there were quite a few. Final result, you guessed it, Figgy won, Matt 6th and, somewhat surprised, us 7th! 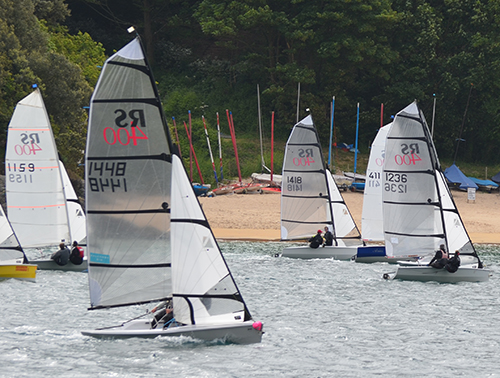 Sunday saw a bit of an increase in the wind, more 15-22 knots. The course board was a bit of a random-number generator with several course amendments in the run-up to the countdown, but, once off, the fleet battled big gusts blowing up the estuary as it progressed to the Blackstone. The run down was fast and furious with the added bonus of trying to miss the Yawl fleet, who had started five minutes later, and then the world and his wife out in everything from canoes to 55ft yachts. This was another mega two-hour race, taking in all the nooks and crannies of the estuary, and as the race progressed it became apparent to us that Figgy was creeping up on us from behind?? ..now, we may not be the fastest sailors on the planet, but we were not THAT slow! He had missed a course change and sailed an extra half-mile to the Blackstone rather than using the Mill Bay mark. Matt had followed him too, but realized half-way they were wrong and turned back. This did not help the SYC fleet rankings: Matt 9th, Figs 7th and, miracles will never cease to happen, …us 5th!

Sunday race 2 sadly was not exactly the best for the SYC fleet. In a big gust Matt bore away on the start line, not seeing Figs below - the resulting crash unsettled the start, with us tagging along again in the back third. After an inversion incident or two Matt retired, Figs and Barney came second ..in spite of finding quite a lot of water in his boat as a result of a hole from the crash. We were DSQ for sailing in the fairway!!! Shame, as we were in sixth too! The less said the better after another two-hour slog!

On Monday, instead of the aroma of bacon butties and pasties we were assaulted by the all-too-familiar smell of…. epoxy…after drying his boat out, Figs was patching the hole! Wind was forecast to be a little lighter but sunnier: after some debate (5 seconds) we left the mast raked a bit. The SYC fleet had a great start, and a nice tight pack of 5-6 boats crept up out of the tide on the Portlemouth side. Approaching the mark, we were feeling good (the rest of the fleet was well behind) - well, the smug feeling lasted about 30 seconds as the wind died, shifted, but maintained a healthy breeze in the middle of the channel for all the boats battling against the tide we had assiduously avoided!!!! The lead pack was now the tail-end pack and - you guessed it - we were dead last!! Being blanketed by the others the wind finally died and we had a grizzly windward rounding and were now well and truly last…the other boats at least a couple hundred metres ahead of us in reasonable breeze ..we were not chirpy.

Well, the ONLY advantage of being at the back of the fleet saved us - a massive gust picked us up first and we shot down the entire length of the estuary at full tilt, and by the time we got to the Bag we had overtaken six or seven boats …we were chirpy! The wind by now was beginning to wind up with multiple capsizes in the fleet. A dead bit passing through the Bag cleared as we headed to Kingsbridge, and we just held on to the lead group of boats, Figgy first, us about 500m behind in roughly seventh, two boats just in front of us, and Matt a few boats behind. The trip to Gerston and back was a very fast two-sail beam reach…..until the kite went up and it became a bonkers three-sail reach…and a gybe was needed around the Saltstone and up Frogmore Creek (of course we made it!)

The return trip via Southpool Creek was equally windy, and the final beat back to the Blackstone was in winds shrieking in the shrouds. Hiking for dear life, we gradually reeled in the fifth-place boat struggling with a very light crew. Figgy and Barney were now on the penultimate leg at the front and Matt had retired. Sadly, the Blackstone bogey did for us again, and a shift and two extra tacks lost our fourth place. The run down was another fast-and-furious mission to catch the boat ahead, with it being neck-and-neck on the last beat - sadly, fifth it was….but who cares……what a fabulous day's sailing!

Congratulations to Figgy and Barney!

James' phrase of the trip was “We need more kicker vicar!”..not quite sure where that came from but at least it makes a change from “I’m in the mood for cake!”

Many thanks to Stephen Thomas from Salcombe Yacht Club who took these fabulous pictures of the event.