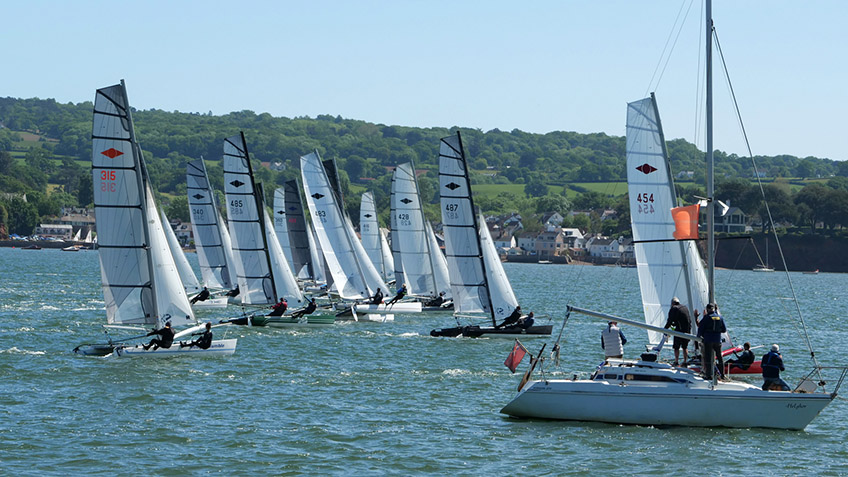 SYC hosted the first Hurricane Open event of the year on the 21st and 22nd of May. The Club welcomed twelve travelling crews from Essex, Yorkshire and Hampshire, joining eight from the home club.

Saturday dawned with no wind and glorious sunshine. Holding the boats ashore for an hour gave time for some needed boat-fettling and allowed the sea breeze to build. Keen to get some races in before the tide dropped, the 20 Hurricanes drifted out but were soon greeted by a solid force 3-4 blowing up the river. 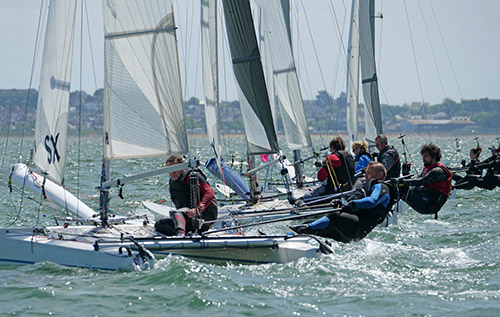 Race 1 saw Harry and Sophie Boygle get the jump on the fleet to take the win, with the top four changing places throughout. Race 2 saw local boat and fleet veteran John Donovan with Harry Durant take the lead on the first beat and not relinquish it until the line, despite being chased hard by Thorpe Bay YC’s Julian Reichert and Jeremy Sandford. Race 3 again saw Harry and Sophie hit the left-hand side of the beat on the first upwind, whilst the rest of the fleet headed more up the right-hand side. 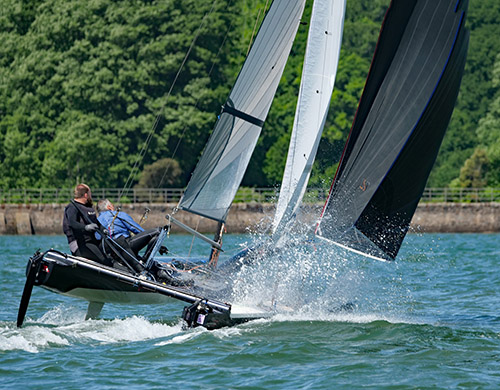 It paid off, and they took a healthy lead at the first mark and were never going to give it up despite Jeremy and Julian chasing hard and holding off Alex Farrell and Miles Mawditt, and George and Howard Warrington.

After a full day of solid twin-wiring weather and frantic action, the fleet enjoyed a leisurely afternoon followed by a BBQ overlooking the estuary in the sun! The leader board was tight, with four boats on 11 points.

Sunday dawned, and despite a short hold on shore, the fleet were keen to get on the water as the sea breeze filled in again, 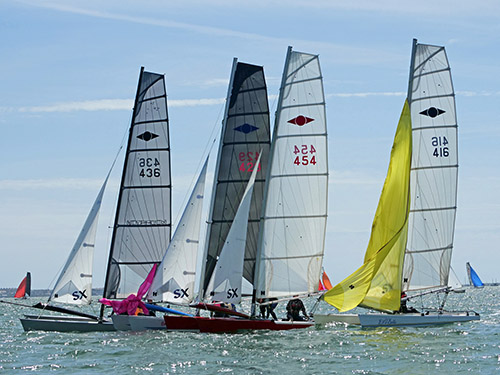 knowing they were in for another day of racing in idyllic sailing conditions.

The first race saw Alex and Miles take the lead and fight off Ben and Kez Cutler-Sharp for as long as they could. Ben and Kez sneaked past on the lay line into the last downwind gate, and took the win. The second race of the day saw the same story with John and Harry and Doug Smith and Freddie Tweedle in the mix at the top mark with Ben and Kez and Alex and Miles. The first downwind went well, with the four closing up and round the same gate mark inches apart. Ben and Kez did eventually get by and held the others off for the next few rounds. The last race saw some tired bodies, but the racing was still great. Ben and Kez this time chased John Ready and Will Power round the first mark. It was close all the way round, until a slight mistake downwind let Ben and Kez by to take their third bullet of the day! 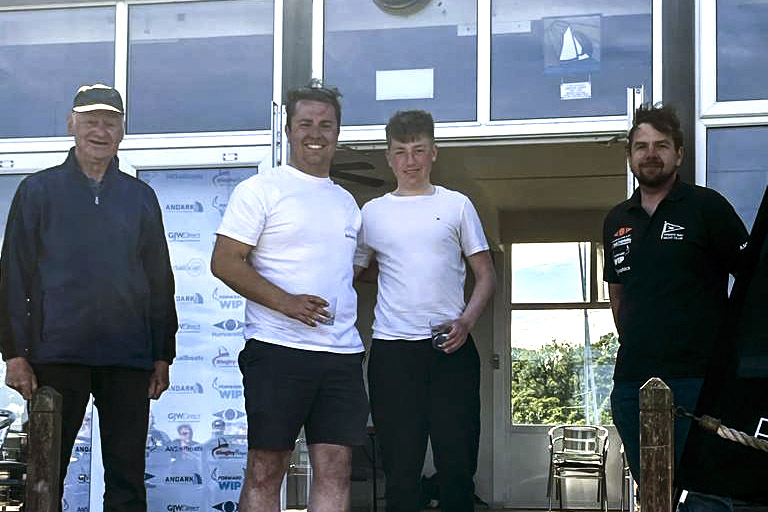 In the end it was Alex and Miles who took the win, showing great consistency on both days. Ben and Kez managed to drag themselves up to second with Jeremy and Julian in third. All in all, a great weekend of racing in fantastic weather and great conditions.

The Hurricane is proving itself to be a versatile boat with crew ranges from 13 to 70-plus. Special mentions to Miles who is 15 years old (and won!), our youngest sailor Oliver Fellows at 13, sailing his first open meeting with his father having bought their SX in October, joining Eloise, Freddie, Caleb and Jack, who are all under 16 and had a great weekend.

The Hurricanes’ next TT is July 2nd and 3rd at Thorpe Bay Yacht Club.

Finally, thank you to all the volunteers at the Club who made the weekend possible, and to those waiting to go free sailing who bore with us while 20 Hurricanes were on shore.