As the 2021/2022 Winter Training comes to an end, SYC reflects on a very successful season's programme. Run for the first time over the 2021/2022 winter, the structured race training sessions were designed to improve junior sailors' skills, and keep them developing (rather than going backwards) over the winter period when many don't sail.

23 children signed up to what was an over-subscribed programme, with 13 day-long sessions planned between November and April. In the event, only one of the planned sessions was cancelled due to weather. 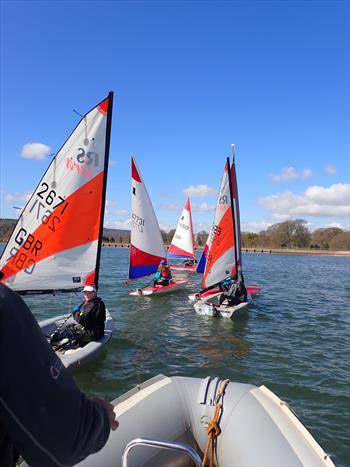 Most of the sessions saw the juniors split into two groups, one for the less experienced sailors who were relatively new to racing, and the other for the more experienced and competitive youngsters. Two RYA coaches, Stuart Jones and Izzy Cramp, were hired, and ran the majority of the sessions. They were supported by the large team of SYC's own RYA Race Coach L2 members and parents. This gave a very high instructor-to-sailor ratio, and enabled excellent one-to-one support on the water.

Attendees came from a number of clubs in the region, with visitors from as far away as Falmouth, and - from parent feedback after the last session - it has been a roaring success.

A parent-run galley cooked hot pasta meals for the middle of the day, and parents brought cakes, and volunteered as beachmaster and coach boat crew. This involvement gave the whole programme a very friendly and inclusive feel.

SYC is very lucky to have an enthusiastic group of junior parents who are such experienced dinghy racers themselves, and their contribution has made a huge difference to being able to offer this provision. Andrew Paley, Jane Hill, Dougal Scott, Duncan West and 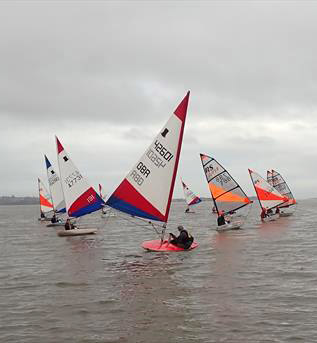 Helen Scott stand out amongst so many who have helped coach and support the events. The standard of the children's sailing has improved substantially over the winter, and all of the children are well set for the start of the 2022 season. This is in contrast to what often happens, with children not being on the water for a 6-8 month period over the winter, and we expect this to make a big difference to their progress in this season.

The more experienced group was initially planned to run for Topper and RS Tera sailors only, although as the season developed some children began sailing in the Lasers. There is certainly a benefit in a consistency of boats, to make the racing more interesting and fun.

Ian Purvis, SYC Commodore in this 250th anniversary year, commented: "We are delighted to see so many enthusiastic juniors out on the water and the engagement from juniors at all levels, and it's very inspiring".

Adapted from Peter Solly's article in Yachts and Yachting. Images by Andrew Paley.

In case you missed them, here are links to other SYC Junior Winter Training reports in Y&Y: