Merlin Rockets at Starcross YC – Round 10

The forecast for the Craftinsure Silver Tiller at Starcross Yacht Club on 11/12 May looked promising for a great weekend’s sailing with F3 NW’ly for Saturday, but a lighter veering F2, round to SE’ly for the Sunday. 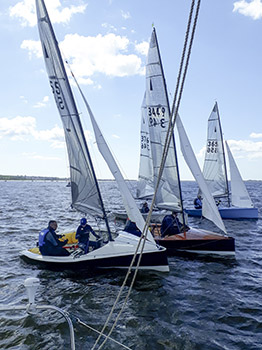 the biggest range of tide which allowed for more options, but also got the travellers out of bed early on the Saturday to come and join in the fun.

Saturday’s racing was set opposite the club, with the leeward mark off the Lympstone moorings. Three Port-hand P courses were the order of the day of approx. 45 mins each. Although the sun was out for the majority of the time, the odd cloud made the solid F3 feel a bit chilly between races.

Three clean starts all had a few degrees of Port bias, but not enough to attract enough attention to warrant Black flag starts.

Going left generally paid off to hook into the lift, but not every time, just to keep everyone on their toes. Awesome three-sail reaches tested some of the crews' boat handling, as taking too long on hoisting and gybing, or losing too much height, meant struggling to make the marks. The run also challenged as gybe early against more tide and hope you got some pressure to soak you down or extend to less tide and protect the starboard lay but risk those getting pressure coming over you.

Race 1. Matt Biggs and Beka Jones hit their stride and looked frighteningly quick at times when the ‘on’ switch was found, especially offwind. 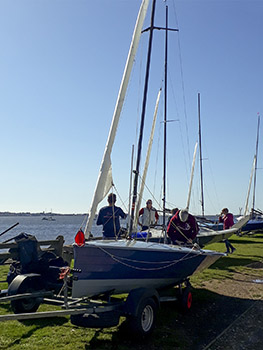 Race 2. The Calverts (Mike and Jane) found their groove in race 2 to take the win. Biggs & Jones, Fran Gifford and Officer guy Fillmore and James Wells/Nicki Bass finished the final beat with a close covering exercise with Wells/Bass just staying in front.

Race 3. Wells/Bass had a good battle with Richard Cain/Oliver Turner; Wells/Bass edging it upwind and Cain/Turner coming back at them downwind. Place changing even on the final upwind resulting in a Wells/Bass win. Four wooden boats made the weekend, with Matt Smith/Jared Lewis in 3442 putting together a decent series with their highlight being 5th in race 3.

Sunday dawned calm with glorious sunshine which after a cool night in the tent certainly warmed you through. Those in tents were envious of those in the camper vans, until one set of occupants managed to lock themselves out (naming no one, 3537). Sailing wasn’t looking likely early on, but by 10am patches of SE’ly breeze were coming up from Exmouth, together with the tide. Cooked breakfast rolls and coffee were in demand as the breeze went from patchy to complete. The sailing area was set half a mile downriver towards Exmouth with the channel allowing a decent length windward/leeward course to be set. Again, generally the left was paying, but you had to keep in the pressure, Cain/Turner disproving the theory a couple of times by hitting the right. 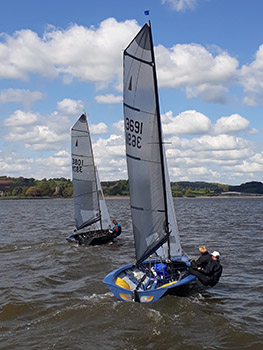 Race 4. Wall-to-wall sunshine and building F2- F3. Wells/Bass got a bit too excited at the pressure, producing the only individual recall of the weekend. Gifford/Officer Fillmore had a great first beat to round first, but it was the Calverts who pulled through and were back to business as usual winning in perfect conditions for them, sealing overall with a race to spare.

Race 5. Finally the Merlins got in the groove and the Black flag came out as everyone pushed for that final extra for a good result. Mark Elkington/Sarah Roberts were also pushing the limits at the top mark coming in on Port resulting in rather a lot of shouting. But it was the Calverts again, untroubled, who sealed another win.

A big thank-you to all the helpers at Starcross who made this a fab event. And thanks to all the visitors; we enjoyed your company and look forward to welcoming you again next year. The Silver Tiller in 2019 is sponsored by Craftinsure, with Magic Marine as the class clothing partner offering members of the MROA 15% off – see the class magazine for more details.

Results for the event can be found at https://www.starcrossyc.org.uk/open-events