There was an excellent turnout for the RS 100/200/400 open meeting at Starcross Yacht Club on Saturday, 30th September with more than 35 boats from the South West racing. For images, click here.

After a disappointing turnout for the Laser Open earlier in the month, Starcoss was delighted to welcome a big turnout of visiting boats for the RS Open on September 30. With a steady 10 knots southerly, Race Officer Russ Gibbs decided to lay a course well down the estuary off Starcross village. As the afternoon wore on the wind freshened and went into the west and the windward mark for the second two races ended up near the railway station. 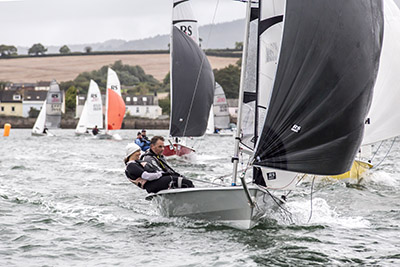 The back-to-back races were brisk and efficient with praise from the competitors. "Really good conditions, fine racing and a great welcome from Starcross as always." said RS200 veteran Pete Vincent. “ Russ and the team on the committee boat did a great job. " Clive Eplett from Frensham Ponds SC was almost impossible to beat in the RS100 class, scoring two firsts and a second. Andy Jones from Chew Valley SC was able to pip Clive in R1 but was runner-up in the next two, coming second overall. Starcross RS100 sailors Oli Greenslade, Mike Bagge and Ed Venmore came in 4th, 5th and 6th respectively.

Similarly in the 17-stong RS200 fleet Ed Whitehead and Karen Oldale from Parkstone YC were unbeatable in R1 and R2 and were fortunately able to discard an 8th place in the final, 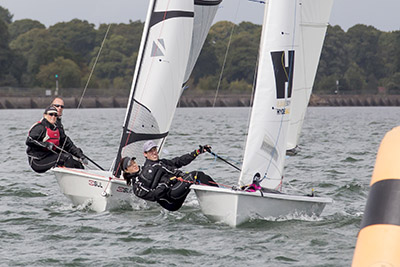 Starcross honour was somewhat restored in the RS400 class when Figs Cain and Barney Dearsley came out of "summer hibernation" to take first place with a first and second, being able to discard an 8th fom R1. Ian Horlock, a newcomer to the class and visiting from Exe SC with Charlotte as crew, came second after winning R1 but were then able to post no better than a 4th. James Bowman, Paul Kelley, Steve Peat, and Ralph Wogan were 8th, 9th, 10th, 11th respectively.