A bright and sunny morning greeted a healthy travelling fleet to Starcross for another round of the RS200 SW Ugly Tour 2019, sponsored by Westcountry Boat Repairs.

Importantly, this was the first part of the Exe Double Header event, consisting of two individual Ugly Tour events on one weekend, with beer and food at Exmouth SC on Saturday night followed by the Exmouth event on the Sunday. The forecast was on the light side, but the fleet's optimism saw us launch, together with the RS400 fleet, into a light wind blowing down the estuary, joining the boats on the water who had already made the sail over from Exmouth with the incoming tide. 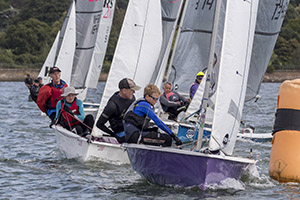 Race one got away with the Exe duo of Fred Mainwairing/Liz Teague leading the race at the windward mark, and then proceeding to hold the fleet to the finish. Tony Wilkinson/Kirsten Glen from Parkstone led the charge behind, with a comfortable second place, with Pete Vincent/Victoria Upton in third, holding off a late charge by John Teague/Naomi Pound to create a nail-biting final few yards.

Race two was swiftly away, with a close race at the top, with Teague/Pound coming to the final mark in the lead, and very nearly attempting an additional lap, but for the exceptionally sporting reminder from Wilkinson/Glen on their heels in third place, with Dave/Jan Pointer 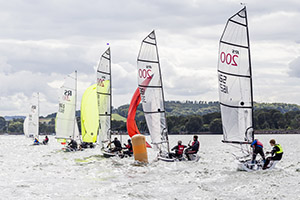 separating them to take second. Mainwaring/Teague were hot on the leading trio's heels in fourth place, to stay in the hunt for the event going into the final race.

The third and final race was again quickly away, with Russ Gibbs and his race team doing a great job as always, which is always appreciated by us sailors. It was Vincent/Upton who stepped up and took hold of the race, and took it to the finish to take first, with locals Charlotte Gough/Claire Hughes putting in a great performance for second place. 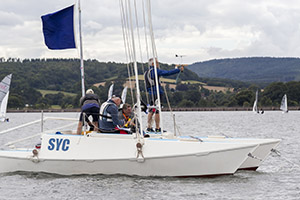 Behind, third place was taken by Teague/Pound, and fourth by the Pointers.

With the final scores on the doors, Pete 'Ugly' Vincent/Victoria Upton from BCYC/Exe SC, won the event, tying on points with John Teague/Naomi Pound from BCYC but winning the crucial final race to take victory. In a rather sentimental speech from Mr Ugly himself, he revealed that after competing for 44 years at sailing events every year at Starcross, this was the very first event he had ever won there. A well deserved and long awaited victory! 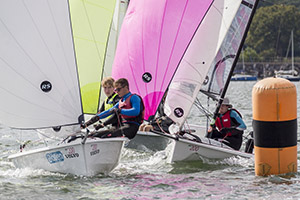 Liz Teague/Fred Mainwairing from Exe SC took third place, only a point behind first and second, and beating on countback Tony Wilkinson/Kirsten Glen from Parkstone, who also won first silver fleet boat in fourth place. First Bronze fleet, and also first juniors, in 8th Place overall were the Cornish boat of Henry Hallam/Ashley Hill from St Mawes SC. After polishing off some cake and tea, the fleet headed off by road and a few by boat, down-river to Exe, for a well-earned meal and drinks at the club. One excellent and very close event finished; now the fleet were eager and ready for part 2 of the Exe double-header on Sunday.