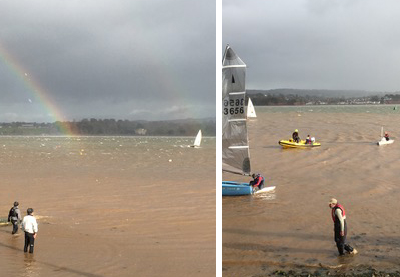 Intrepid sailors were defeated by the conditions at our annual RNLI Pursuit Race on Sunday November 12th! Despite a forecast of strong winds a good number of sailors turned up to sail the annual fundraiser. At first it seemed as if the wind had moderated, but even so the Cat sailors showed their innate caution and none rigged. Foolhardy monohull racers did and the race officer started the race. As squally and gusty conditions continued (see video clip) some decided that discretion was the better part of valour and stayed on terra firma.

A Laser 4.7 with Jonathan Newall at the helm started the race but clearly experienced some difficulties going downwind, although he managed to remain upright. Other Lasers joined in as did a Solo and three Merlin Rockets with arguably the most experienced helms, although two of them had first-time crews! What a fantastic introduction to Merlins and Starcross! As the conditions worsened there were a number of capsizes and the intrepid safety crews were fully deployed. Jonathan’s Laser dismasted, and despite the great spectacle for those on shore the OOD wisely decided to abandon!

A video clip of the event is below!