Who would be a Race Officer?

At Starcross RS100 open this year, my old mucker Russ Gibbs drew that short straw, but, determined to have his fun, amended the SIs, seemingly just for the mischief of it, including making the start sequence 3,1, go. Are you providing teenagers to re-programme everyone’s watch, we asked at the briefing. 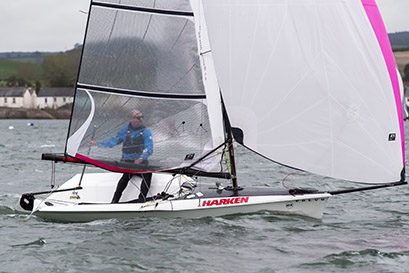 Having studied the forecast, Russ laid a course for the first race with a hint of skew, to take into account all the signs confirming the forecast back from SW towards S. Wisely, Russ also made sure the line had a touch of starboard bias; anything the other way and a submerged sandbank came into play after a half a dozen boat lengths. That could have caused some shenanigans.

Inevitably, the wind-strength and conditions were just perfect for Chew’s Chris Goldhawk, who had announced he was attending. Until he remembered Strictly was back on TV and he’d likely miss the show, so he stayed at home after all. Clearly, he prefers wearing his glitter make-up and spangly clothes to his sailing kit. 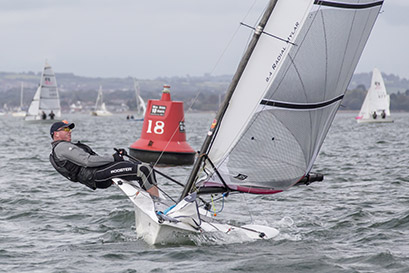 Anyway, off we went, with Andy Jones showing good speed upwind and Clive Eplett making the most of scalloping starboard gust-‘n’-lifts coming off the shore to stay in contention. And also to form the filling in a sandwich with Andy’s brother Steve in third. It stayed tight between the first two, Andy edging the beats, your correspondent closing downwind, until Andy found a big lefty up the third beat. It looked game-over. Until he capsizes on the first gybe of the 4th and final run. However, I’m a very polite guy, so returned the compliment and did the same. You are welcome. We both recovered just quickly enough to keep Steve behind at the finish. Russ and team then sent Andy on a bonus lap, having not counted him through the leeward gate on one occasion, losing him in a melee of 200s and 400s. Good work, wear him out, guys. Happily, the error soon was acknowledged, sorted and order restored. 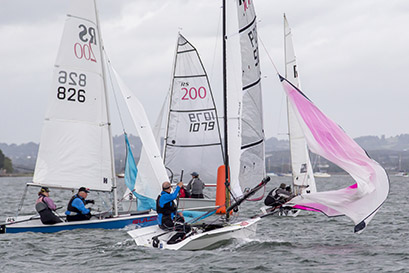 For race 2, our RO bowed to the actual, misbehaving wind direction, moving the course right. Off we go, just as that forecast back actually turns up, late. Timing; ; ; the art of good comedy. (See what I did there?) Clive finds himself to the left of Andy in a left-shift on the final approach to the first mark, drives over and pulls away downwind. Until run 3, where, with nightmare-echoes of Como reverberating, he splobs down the run in the softest breeze of the day. Meantime, Andy full-on planes the second half, making huge inroads, but ultimately not quite enough. Honours even after two, then, with Steve again third.

For the third and final decider race, Russ and team move the course left again. Just as well, as the tide had turned, now doing some starboard-tack for us. 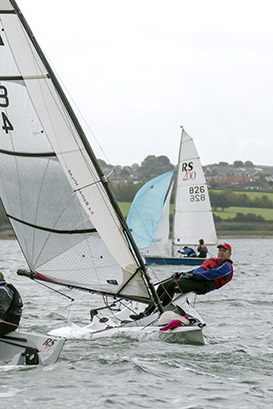 Clive, just, arrives at mark 1 first, but gets a nice one downwind to build a decent buffer. After that it’s a game of dodge the 200 and 400 traffic and keep the big stick pointing up, to close it out. Andy again 2, Steve again 3rd, echoing the final overall result. The battle of the locals was won convincingly by Oliver Greenslade with a full house of 4th places, keeping Steve looking over his shoulder in every race.

The post-mortem debate is whether a foot-long horizontal split in his mainsail from that capsize in race 1 had slowed Andy down thereafter? Gentlemanly as ever, he said ‘no’. I’m not 100% convinced of that. His upside might be a new sail for the next event, though.

Thanks go to Starcross for putting on a great open; good sailing and lovely hospitality. Perhaps if we could also have a start or two alongside Sunday club-racing next year, a few more would make the trip. Y’all should.

The next RS100 event is the Inlands at Chew on 28/29 October. Rumour has it that new Chairman David Smart has finally run out of injury excuses and even located his boat in the bushes. So that is what the wobbly blue stripe is for. Mr Goldhawk is particularly looking forward to that weekend too, but only ‘cos it will be the Halloween show on Strictly.