The thirtieth Exe Sails and Covers Starcross Steamer was held on Sunday 19th January. This was also the 5th race in the 10-race Sailing Southwest series where competitors compete in winter pursuit races all over the south-west. Due to high winds the Steamer last year had to be cancelled, so we were a little concerned that we might not get up to the 100-boat limit. We need not have worried: within 14 days of the entries being open we had a waiting list.    Photo Gallery by Garnett Showell is here

This is the first year that we have used trackers supplied by Sailing Southwest as a backup to our well-proven system of mobile and fixed line finishes.

The weather a few days before the Steamer consisted of Atlantic gales and rain, but all the forecasts consistently indicated that by the weekend a large high was going to be established over the whole country. Reports from the club on the Saturday indicated that the Exe was covered in thick fog, which didn’t finally clear until 2:30, and a very light wind, just a bit worrying for the Steamer to be held the next day. 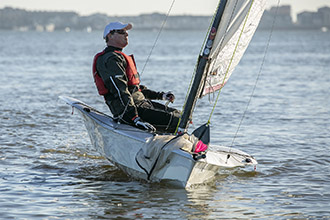 On the day, no fog, a clear sunny sky and a 5 to 7 knot wind from the north ensured that the Steamer was going to happen. It was the wind that you would expect that no one would capsize. Well, they didn’t on the water, but unfortunately Mike Arstall, a club member who was due to help, managed to capsize his car on black ice in the narrow road on the way to the club. Mike was taken to hospital, checked over and has made a full recovery; the same cannot be said of his car! With the road blocked, helpers and competitors had to use a detour, delaying their arrival at the club. Thus the decision was made to postpone the start by 15 minutes to give everyone time to arrive. 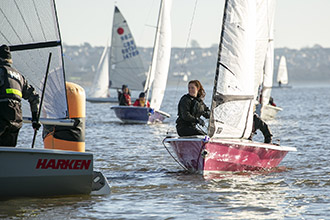 So it was at 12:15 that the Firefly of Jono Pank and Angus Cook set off, followed 5 minutes later by the Solos, Enterprises and Laser Radial. The idea of a pursuit race is that the faster boats start later but the Firefly clearly enjoyed the conditions and pulled away from the chasing pack, so obviously here was a contender for the overall prize. The largest fleets this year as in many previous were the Merlins and RS400s, both claiming 14 entries, but where were the Lasers? Normally we would expect at least 6, but this year only 2 Radial and one Standard entered.

The final fleet, the RS800s, started soon after the Firefly went through the line for the first time. Fortunately they were soon able to pass the Firefly so that everyone was on the same lap – it does make checking who is in the lead so much easier. After about an hour of sailing the wind started to fade and it depended on where you were on the course how it affected you.

Fortunately it only lasted about 5 minutes but it must have seemed a lifetime to those sailing; it returned again to the north as it was at the start.

The Firefly was determined to hang on to its lead, and with extreme roll tacking, Jono kept Angus busy bailing the water out from the bilges and no one seemed able to break through the chasing pack to challenge the lead. Another lull in the wind occurred about 2 hours into the race, and now with the tide ebbing, if you were running with it, great, but beating against it was very, very slow, as Andrew and Caroline McAusland found out trying to get round the windward mark.

Finally the Merlin of Mike and Jane Calvert were able to get within striking distance of the Firefly. On the long final downwind leg going with the tide, the lead of 100 metres was down to just a couple of metres at the mark. 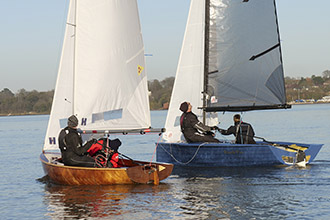 Jono protected the inside track to ensure that he went around the mark first, but on the beat the Merlin had a clear speed advantage and pulled out a small lead at the finish, a very close finish after 150 minutes of hard racing. Just a short distance behind were the K1 of Liam McGrath and the Comet Trio II of Andrew and Caroline.

Even with these extremely light conditions, the accuracy of the Great Lakes handicapping was proved again with 7 different classes in the top 10.

Putting on such a large event, the safety requirements have outgrown our club facilities, so we have to call on the services of Exe and Lympstone, our neighbouring clubs. Our grateful thanks to them: without their help we would be unable to hold the Steamer. 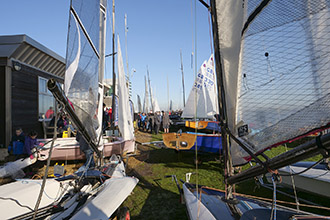 It takes a huge effort to put on the Steamer every year, so my thanks to the galley for producing so much hot food and drink, and the multihull fleet and non-sailing members from Starcross who give up their time to organize and man the event. A special mention must be given to Sam Woolner of Exe Sails and Covers who missed the Steamer this year due to poor health – we wish him a speedy recovery – and for supplying the fantastic prizes. In total over 60 volunteers are required on the day both on and off the water and we look forward to doing it all again next year. Thank you also to the competitors who travel to Starcross every year, to make the Steamer so memorable. The Steamer next year will be on Sunday 21st February, with the first start at 11:30. Planning has already started and we look forward to welcoming both old and new faces. A full list of this year’s winners can be seen on the Starcross Yacht Club web site.