SYC hosted a Topper and Tera open on 11th June. As part of the ITCA Topper traveller series, 20 boats sailed on the River Exe in an exciting afternoon of racing. Visitors came from various clubs in the south west, as far away as Portishead and Sutton Bingham, and included two Toppers which arrived by water from Exe Sailing Club.

The event had the usual friendly atmosphere, and organiser Bob Beare 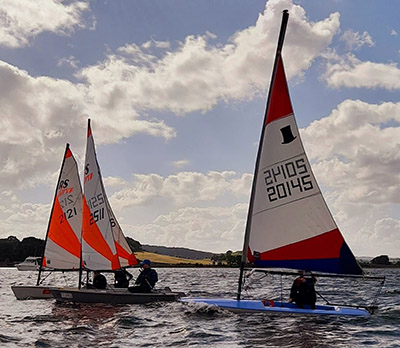 had laid on both sun and wind. Sailors battled some tricky late-afternoon high tides and an ever-shifting 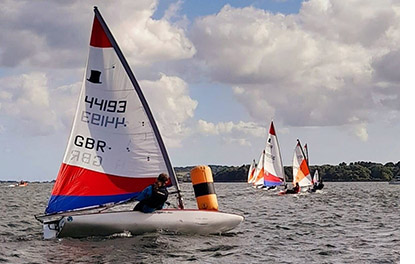 gusty wind during the four races, which had committee boat starts. There were separate starts for the Topper and Tera fleets, with the most hotly contested racing in the Topper 5.2s and Tera Sports. There was a high standard of racing at the top of the fleet, many sailors having sailed through the winter in Regional Training Groups and Starcross Winter Training.

After a break ashore for tea and cake, Race 3 saw a big gust come through, which hit the Topper fleet badly, capsizing many of the boats. The Teras, having had a separate start and so being in a slightly different place on the course, largely escaped this gust.

Both the Topper and Tera fleets saw spirited and enjoyably-competitive racing between certain boats. The battle for 2nd, 3rd and 4th in the Tera Sport fleet was particularly close, with three of the Starcross Tera sailors, Henry, Kirsty and Jack, changing places regularly.

This was the first Open meeting for some of the sailors, and they showed excellent resilience in the sometimes-difficult conditions; gaining in confidence and improving as the day progressed.

Full results are shown below, and podium positions were

Endeavour Awards were also made to Amelie Ballantyne, Connie Laver, Imogen Hill and Tom Solly, recognising their achievements and resilience in the challenging conditions. Awards were presented by John Allen, MBE.

The next Starcross Junior open event is the renowned Summer Junior Regatta, which runs 18-21 August 2022. It is open to children 8-18 years old sailing boats RS Aero 5 and slower (PY over 1129). There will be Gold and Silver race fleets to cater for different standards, and socials including on and off water games, disco and evening meal (tickets on sale nearer the time), and Camp Out Night
Entry opens soon – keep an eye on Opens - Starcross Yacht Club (starcrossyc.org.uk)

Thanks to Bob Beare, Paul Kelley (OOD), John Allen, MBE and all of the Committee boat, safety boat and galley helpers – as well as all of the unsung folk behind the scenes for Saturday’s Open.